Posted on January 29, 2018 Categories: Global Ageing News, Member News, Mission Comments are off for this post 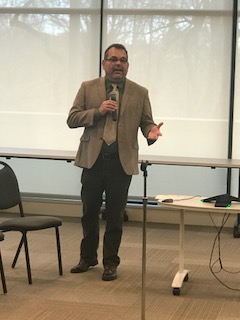 In January, the Global Ageing Network hosted its first “Wisdom Talk” with Dr. Enrique Vega, Regional Director for Health and Ageing at the Pan American Health Organization (PAHO). PAHO’s origins precede the World Health Organization (WHO), focusing on health issues in the region. However, as Dr. Vega pointed out, health concerns, for the most part, do not include the concerns of older adults. As a result, the infrastructure to support older adults in Latin America and the Caribbean is nascent.

He shared two stark examples: the high incidence of blindness among older adults in Chile simply due to lack of access to or awareness of cataract surgery as a way to mitigate severe vision loss. And, the paucity of physicians trained in geriatrics. In Cuba, for example, physicians undergo extensive training in maternity care at a time when birth rates are at an all-time low, while training in geriatrics barely exists.

Dr.  Vega is a relentless and passionate advocate for stepping up the focus on the aging population in Latin American and Caribbean countries. Thankfully, he is among a growing number of individuals who are part of the Global Ageing Network who make the case – again and again – to build systems and supports so that people can age with dignity and choice. And, so that families, who more often than not assume the role of caregiver, feel supported and capable in that essential role.

Listening to the story of aging in Latin America and the Caribbean is a stark reminder of the importance of our global network – to connect, inspire, learn, and share. And how, as the number of older adults continues to grow – in some countries exponentially – we need to lead. Older adults around the world deserve nothing less.